A Brief History of Our Stained Glass Windows

by Donald A. Bailey Sunday, 6 October 1996, of the First Unitarian Universalist Church – Abridged A house painter and sign painter by profession, Fridrik Sveinsson had been born in Iceland in 1864, but he moved to Canada as a child and then to Winnipeg in 1882. Although his brother attained the rare distinction for an Icelander of becoming a Roman Catholic bishop, Fridrik Sveinsson became a charter member of the First Icelandic Unitarian Church, founded in Winnipeg in February 1891.

For many years, he was secretary of the church board.

When the church decided to construct its second building, at the corner of Sargent Avenue and Sherbrook (then called Nena) Street in 1905, Sveinsson (known in anglo-celtic Winnipeg as Fred Swanson) was commissioned to design its windows. Most of these windows were moved in 1920 to the church’s third new home, the church building on Banning Street. One or more windows were left behind and are now presumed to be lost.

In 2001, pairs of each of the three large and the two small rectangular windows as well as the pair of small “Gothic” windows, were moved from the church on Banning Street to their present home in the Unitarian Universalist Church at 603 Wellington Crescent, where they were incorporated into the new sancutary structure built on the East side of what was a private residence (now referred to affectionately as “Unitarian House”). Unfortunately, the same number of stained glass windows (except for the pair of Gothic ones) had to be left in the Banning Street building as a condition of its sale.

The large windows with the harps or torches, and presumably the small Gothic torch windows, were created for the 1905 church and then moved with the congregation to the Banning Street church in 1920. A stained-glass specialist recently suggested to us that the “arch windows” appear to be much older than the others, so they may have been designed for the Sherbrook and Pacific church, erected in 1892. The narrow side panels were created as filler in the current building; they nicely set off the original windows but were not part of the earlier design.

There are three basic motifs for the windows, each highly symbolic, as the late Stefania Sigurdsson and the late Reverend Emil Gudmundson explained them to Stefan Jonasson in 1982.

These two windows represent the blending of ancient Greek wisdom and the Judeo-Christian tradition, each of which influence the early Unitarian movement. The arch represents the Greek stream; the grapes (somewhat hidden by the flowers) remind us that Jesus was the “vine of life,” while the heart represents the Christian doctrine of love (as articulated in passages such as 1 Corinthians 13 and 1 John 4:7-21). The Jewish commandment was also to love God and our neighbours as ourselves.

Overall, the harp window reflects motifs inspired by the poem “Njola” (Night) written by mathematician, astronomer and philosopher Bjorn Gunnlaugsson in 1842. (A copy of this book-length poem was placed in the cornerstone of the Sherbrook Street church in 1905.) Gunnlaugsson was a noted religious universalist, who believed that all religious traditions were avenues to the holy.

The harp depicted on the windows, however, was patterned after the harp which appears on the gravestone of the poet Sigurdur Breidfjord in Reykjavik, who was a contemporary of Bjorn Gunnlaugsson. Each of the strings on the harp have names: Joy, Sorrow, Love, Heroism and Death. The Nobel laureate Halldor Laxness immortalized their names in his novel “World Light.”

Taken together, the harp, star and laurel leaf point to the harmony of the heavens and of earth as manifestations of “…the fundamental law of harmony visible throughout creation.” 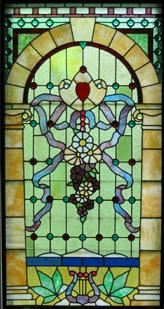 This pair of large, and the pair of small Gothic, windows employ the most commonly used emblem of Unitarian churches in the late 19th and early 20th centuries, if one ignores the cross, that is. The particular form of the torch depicted here was often imprinted on pamphlets and letterheads of Unitarian congregations. The Unitarian Church at Gimli used this torch as its logo for many years.

Emil Gudmundson asserted that this window was intended to represent the place of Unitarianism as spiritual heir of the 18th-century Enlightenment. Given what we know about Fridrik Sveinsson, Rev. Rognvaldur Pétursson, and the other Icelandic Unitarians of the time, this is indeed the most plausible explanation. 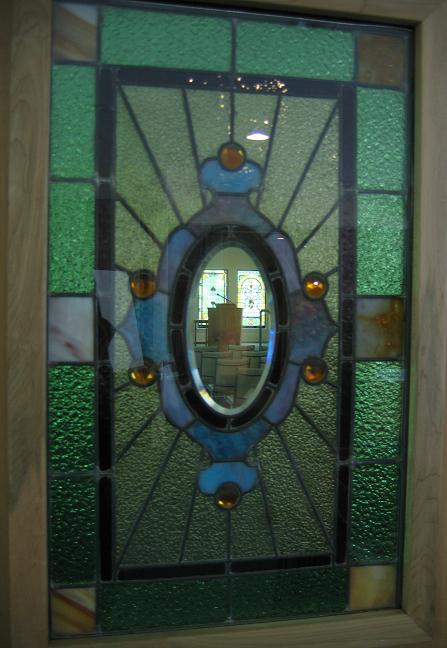 These windows were originally set above the main panes, but are now installed in the Sanctuary doors. The windows with a small oval of clear glass are thought to have been inspired by the Transcendentalist heritage, with its emphasis of direct experience of God or the Over-Soul. (The same sentiment appears to be expressed in our current principles as the “…direct experience of that transcending mystery and wonder, affirmed in all cultures, which moves us to a renewal of the spirit and an openness to the forces that create and uphold life.”)

The windows with the lamps reflect the same sentiment as the torch windows, although Emil Gudmundson seemed to feel that nuances of the lamp (as distinct from the torch) pointed more directly towards religious scholarship and the learnéd ministry.